Dartford Football Club was formed in early 1888 by members of the Dartford Workingmen’s club and for the first few seasons, played only friendly fixtures with the occasional foray into cup football. A run to the final of the Kent Senior cup in 1894 encouraged the club committee to enter Dartford as a Founder-Member of the Kent League for the 1894-95 season. It was in October 1895 that Dartford first played in the FA Cup. 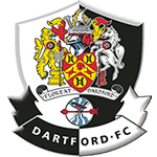 Please get in touch we would love to give you a try. We Specialise in new & unusual ALES